At Rosses Point, at the entrance to Sligo Harbour, stands a man apart. A man apart, and yet held at the very heart of the community. To the people of Rosses Point the Metal Man links past with present, and no doubt will link present to the future.

The Metal Man was originally cast to stand on a tower where the Blackrock lighthouse now stands in the bay. The Blackrock has had a tower of some description to aid navigation since the early 1700s.

There are many stories and anecdotes relating to the Metal Man. Some say he is the only Rosses Point man never to have told a lie. Others swear to have seen him come ashore to fetch a loaf of bread. One can assume, however, that a ship was near the rocks the day he took up duty, for in his haste to get to his position, he dressed hurriedly, buttoning his tunic incorrectly. Apparently he has not noticed, or perhaps been too busy to correct his mistake.

Above From The Metal Man page by Willie Murphy http://www.wildatlanticshanty.ie/Heritage/metalman.htm

I co-wrote a song loosely based on the Metal Man’s life and history… check out my band NoCrows performing it here: 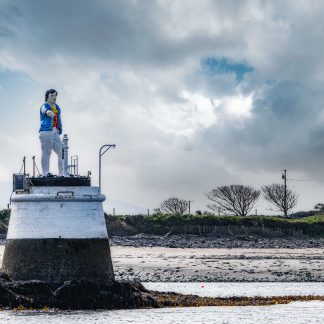