A magic night under the stars capturing Maurice Harron’s beautiful public artwork under our galaxy, the Milky Way.

I like this image, which initially formed part of the panoramic version of this (Galactic Chieftain #1) which can also be viewed on this website. However this single 20 second exposure, apart from catching a little lucky illumination on the sculpture from a passing vehicle on the road below, also captured a shooting star.

To many Sligo people, passing the Gaelic Chieftain is confirmation they are on the home stretch on their journey from Dublin, so in a way we feel as much ownership over him as the Roscommon people do.

When they were younger, we always told the kids while driving past, “the Chieftain will protect us now that we are home in Sligo”.

Contact me at edleeprints@gmail.com to book a portrait session 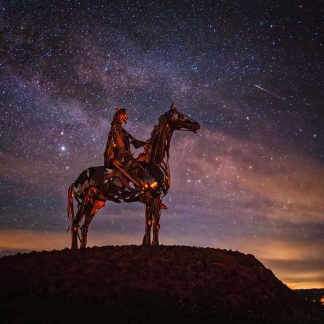